Anna Matveinen is working in the Vent Space project room during the week of November 18 to 25. Matveinen’s work in Vent Space is a moment of experimentation. Not only is it lacking finished artworks, according to the artist, there wasn’t even any detailed plan of what is going to happen, only some rough ideas. It is a work in progress, a process of exploring the space. The exhibition started in a half-empty space with only some obscure objects and it is changing every day while the artist is present. This time, Vent Space is not used as a classical gallery, but it is instead an actual project room, just as it was once meant to be. In this artist’s playground, Matveinen is trying to take everything from the space and put it to work for her project. What does it feel like, how does it sound, what effect will it have on the objects and visuals placed in it and vice versa?

One would say, a centerpiece of the place during Matveinen’s project, is a huge and messy white net, symbolically functioning as a network connecting all of the other symbolic pieces in there. A sort of immersive video is projected on one of the big walls, showing what seems to be exploration of elements, a visual journey through different places and fragments. The visuals that are shown, are not special, in fact the motives used are drawn from very usual situations and things of everyday life: landscapes of forests, natural empty spaces and seashores shot from the moving vehicle with a shaky camera, a lot of sea and waves, an electric fan, flowers in a broken vase, washing hands, smoking, some kind of ghostly empty room with usual, but at the same time strange objects in it etc. This mix of video excerpts shot by the artist and some copyright-free stock videos is completely contextless, in contrast to other video pieces usually presented in exhibition spaces. The only context is being there and then. 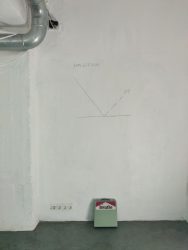 Texts and words are the key elements in Matveinen’s current project. They are, in a matter of fact, presented in different forms through the exhibition. A typewriter placed in the corner with a long piece of some kind of fragile paper-like material – a symbol of potential word, suggesting the invitation to write, or maybe it is there for the artist? In a smaller room hangs a tiny cassette player, chanting something about time, process and some kind of utopian paranoias. Again, spoken word is filling the small room where a person can ponder on it. Written words, texts and scheme-like drawings are also occupying almost every wall. They are quite abstract explanations of ideas the artist finds relevant. The scribbles written with charcoal are commenting on terms such as energy, cyberfeminism, allosteric modulation etc. The latter, by the way, is also the title of the exhibition. Allosteric modulator is a term typically used in biochemistry and pharmacy, but Matveinen seems to interpret and use it in her own way, meaning something that is “a tool, help, release”. I would prefer not to dive into any deeper speculation about the meaning of all these words to avoid the danger of over-interpretation, which is quite possible in case of projects of this type. They should rather be viewed as mental guidance for perceiving the space and the artist’s existence in it. 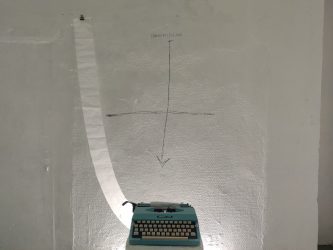 After spending some time in the room, the allosteric modulation is starting to make sense. The project is indeed a very important exercise for the artist, “an obstacle, adversity to help you fuse to the occasion”, as the artist puts it in the wall-writing. It is inevitably yet another reaction to current times, a logical approach to site-specific project after being isolated for months and being unable to work in studios, forced to move the whole artistic practice into computer-based state. It is indeed the artist’s tool and release. It might actually be a great idea for all of the exhibition spaces that are obliged to close their doors during the pandemic – why not let artists use the space and get wild? Anna Matveinen did it anyway. 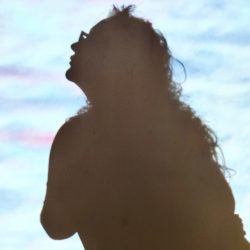