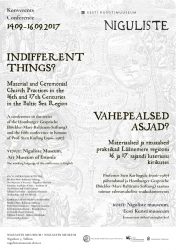 The international conference “Indifferent Things? Material and Ceremonial Church Practices in the 16th and 17th Centuries in the Baltic Sea Region” (14–16 Sept 2017) in the series of the Homburger Gespräche (Böckler-Mare-Balticum-Stiftung) and the fifth conference in honour of Prof. Sten Karling (1906–1987)

Icon worship, the Catholic Church’s love of luxury, the grandeur of ceremonies and vestments, and the sale of indulgences, were among the most significant criticisms expressed by the Reformation movement. It was, however, only in 1548 that a more serious dispute over adiaphora, or Mitteldinge, began in the Holy Roman Empire of the German nation; the attitude of the evangelical church towards “indifferent things” was ultimately formulated in the Konkordiaformel in 1570. Confessional and institutional regulations often differed substantially from the actual practices of congregations. Naturally, the two were interdependent, and therefore, it seems productive to study the material and art history of the Lutheran Church of the Early Modern period through the relationship and mutual effects of the norms and their executors: pastors, members of congregation, artists etc. At the same time, the secular world, though seemingly outside the ecclesiastical life and practices, cannot be overlooked, together with its connections to power and money. We will, therefore, proceed from the view that in order to comprehend the Lutheran Church of the Early Modern period, it must be studied as a complex phenomenon, influenced by a number of factors, including material objects. Also, we are interested in whether “regional practices” existed, and will, therefore, focus on a particular historical area, the evangelical territories of the Baltic Sea region.

The working language of the conference is English.

In co-operation with the:

Guntis Kalme (Luther Academy, Latvia)
The artifact of art as an adiaphoron in the ecclesial space: theological principles of its usage

Gerhard Weilandt (University of Greifswald)
Destroy them! Reuse them? – How to deal with images of the old faith in the era of the Reformation in Northern Germany.

Anu Mänd (Tallinn University)
The Old and the New: Changes in the Tallinn Parish Churches from c. 1525 to c. 1550

Marcin Wisłocki (University of Wroclaw)
Visualising a way to heaven. Remarks on emblematic programmes in Lutheran churches in Pomerania

Vija Strupule (Riga)
The role of interior paintings in the Lutheran church indoor concept: the Cathedral of Riga in the 16th–17th centuries.

Merike Kurisoo (Art Museum of Estonia)
Indifferent things or not? Tallinn´s Church Order from 1606 and objects in ritual practices

Martin Wangsgaard Jürgensen (National Museum of Denmark)
A meditation on the sinful man. Some thoughts on Lutheran devotional art illustrated through an example from 1586