The World Came Through My Window

Personal identity demands constant transformation in creating a narrative of our lives. While contemporary artists continuously explore their identity, most often in the form of self-portrait, Ryan Galer is researching the intersection of identity, memory, and narrative by means of the personal artist archive. The author’s strategy implies a tension between his personal and artistic persona, usually including social commentary and critique of official spaces that embody some degree of financial and intellectual power and authority.

In today’s world archives are constantly being created, both physically and digitally, thanks to the inherent human need to map everyday life. Hal Foster describes the nature of archives as at once “found yet constructed, factual yet fictive, public yet private” (1). Indeed, how much control do we have in shaping our own identities? Over time, Galer has become rather sensitive and cautious about what exactly to make public, partly since audiences around the world react differently depending on their level of interest in and prior knowledge of art, as well as the tradition of art history of a particular country and current contemporary artistic tendencies. Besides such factors, performance always involves challenges like what exactly the audience will bring to the work through their participation (if anything?) and whether they will rely on what they have seen or on their physical and mental experience. The desire to include the local community is evident in the author’s surreal travel comedy project Tourist Office for Lost Souls (2017-2019). With his collaborator Rebecca Larkin, he performed live shows and held a one-week residency at the Dom na Kinoto in Sofia, and later, at Vent Space in Tallinn, each experience consisting of an inverse tourist office, inviting locals to come to them and share stories, advice, and artwork. 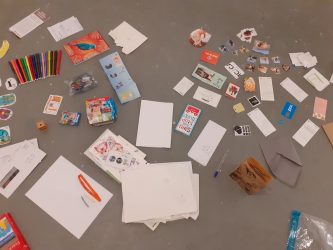 The author has travelled all over the world, from the US to France, Bulgaria, and Lithuania, among other places. He currently lives in Estonia, and it is natural that in the process of moving so much, some things were kept, left behind, forgotten, or lost. Different objects, photographs, pieces of writing that he has gathered in the emerging archive draw their importance from the author’s validation, subjectivity and sentiment. Yet, in an attempt to maintain and preserve the memory of a certain place and time, everything loses its original purpose and value. For example, in Contents of My Wallet (2020) everyday things such as boarding passes, cinema and subway tickets, banknotes, different receipts etc., essentially become evidence of a journey, the testimony of a specific time and place in his life.

In our memory everything becomes equally valuable and significant. All points of our recollections are tied to one another. They form chains and connections in our memory which ultimately comprise the story of our life. To deprive ourselves of all this means to part with who we were in the past, and in a certain sense, it means to cease to exist. (2)

The author’s photographs, videos, and texts are usually traces of his performances,       representations of the moment that can’t be recreated in its original sense and context. Perhaps, it is easier to leave things behind if you write them down?

His on-going artistic research project, The Galerian Archive for Semi-Fictional and Real Persons, Places and Things (GASFRPPT) includes a hypertextual encyclopedia, a timeline, bibliography, found and personal photos and objects, and performance documentation in many media. It proves how important recording is to the author. He is well-aware of his own struggles with experience, memory and their various forms of documentation, and wants to explain these in a broader context to himself, but also to his audience.

Similar to the tension between author’s personal and artistic persona, his work engages with the question of private and public space, which are issues only further emphasized in the context of a pandemic. Social commentary on the requirements of artistic success was developed in a semi-fictional organization Cabaret Galer (a kind of precursor to The Galerian Archive, which was held during 2015 and 2016) that played host to many of the author’s performance pieces in Paris, examining the dynamics between artists and curators, their responsibilities and expectations in a world art center. Ultimately, who can you trust with your personal / artistic space?

Galer’s work motivates the audience to reconsider their own past, as well as to define its role in the present. As Jacques Derrida suggests, the archive may not be a “concept dealing with the past that might already be at our disposal” but rather “a question of the future, the question of a response, of a promise and of a responsibility for tomorrow.” (3)