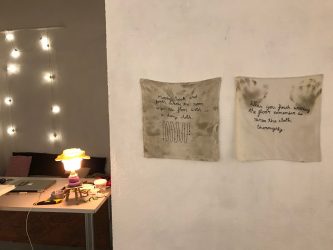 The work is the death mask of its conception – Benjamin Walter, One-Way Street

I am in my town, in front of the statue of the washerwomen, in the southeast of Gran Canaria, where the wind blows the strongest. The seconds that have sustained those figures are many and, however, this is not enough to get a name on the map. But when I use Google maps I can remember how was to walk around them (although the absence of wind makes a difference). I realize that the app has blurred their faces, mistaking them for humans. I am miles away, so I ask my mother to please come closer to the statue and take a clear picture, in which we can see their faces. She does me the favour and comes closer, then she writes me: ‘The faces are blurred, and they will remain like that permanently’.

My father’s uncle had a pig who was always covered in her own shit. There were so many flies in the stable that left almost no space to breathe. Once in bed, with all that collective sounds inside of me, I used to close my eyes but the flies were still flying around the room, settling on my skin and digging it.

Augeas died at the hands of Heracles for having the stable too dirty but I think my uncle died for another reason. Now when I go back to that same place, there is a donkey. It is very clean, always cheerful and bright, with soft hair that I can touch. And yet the flies continue to flutter around us in a parallel reality.

At the end of the century, the statue was unveiled. I don’t quite remember what was there before, although I’m sure I’ve seen it in pictures. 1999. I was a kid, obsessed with the figure of Mickey Mouse as a sorcerer’s apprentice and the water that was being piled up without an end. From my perspective the statue was about that: keeping everything clean for someone else, the fear of being discovered, the hope of having someone to clean for us. Years later I read that the short is based on a poem by Goethe and it unveiled a different meaning.

We should understand that there are processes that have no end. Such as this exercise of recalling memories about dirtiness and cleanliness, all spread around my flat.

There is another figure doing the same process without an end. I used to see her every morning on my way to school, washing and scrubbing the busiest road. She did a hell of a lot of cleaning. Cleaning a space that the people would step by a second after. The ideal line? The line at infinity. 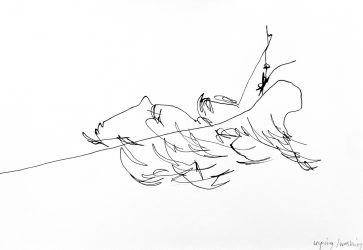 The concept of dirt accompanies us forever, stays in the space between these letters, beyond language.

For his excretions also special arrangements had to be made, and this was a torment to him every time—a torment from the uncleanliness, the unseemliness, and the smell, and from knowing that another person had to take part in it – Leo Tolstoy, The Death of Ivan Ilyich.

All my memories pile up like the drawings that Ulvi had spread across the floor. Lines that show the forgotten story of cleaning. ‘Cleaners and cleaning attract insufficient attention’ Ulvi tells me, and I keep thinking about it as I walk back home.

Mythological creatures begin to approach me. ‘We have been here since the begginig’. The akaname of the Japanese folklore and its long tongue to lick the filth and grime sticking to bath places and bathtubs. The gruagach of the Scottish folklore sweeping the floor, the Fenodyree of the Isle of Man… What do they tell about us?

‘My working will be the work’, writes Mierle Ukele in her Manifesto for Maintenance Art.

‘Their work will be my work’, seems to say Daniela Ortiz in her artwork 97 Empleadas Domésticas, a collection of photos that Peruvian high-class people posted on their social media, showing how they tend to place their domestic workers in the background.
Ulvi’s work is necessary to close this triangle. Her way of conceiving cleaning as a kind of game, while elevating the action of cleaning to art, is a process of self-liberation from this close relationship between the history of cleaning and the history of oppression.

The echo of this dirty-clean dichotomy extends its meaning into abstract domains. The shame, the slavery, the madness… Cleanliness is the goodness, dirtiness will bring you to hell.

I get into the shower and rub my whole body. I try to turn everything into a kind of game, as Ulvi has taught me during these days. I feel my left hand draw a line that remains in space like a weak sculpture as the water seeps down the drain and disappears.