Werner Matthias Schmid has a diploma in painting conservation from the Istituto Centrale per il Restauro (Central Institute for Conservation), Rome and an ICCROM certificate in stone conservation. Before joining ICCROM (International Centre for the Study of the Preservation and Restoration of Cultural Property) in 1990, he was working as a freelance conservator-restorer in Italy and Germany, mainly in mural painting and stone conservation. At ICCROM he managed projects in the field of mural paintings and related architectural surfaces, including the development and implementation of training courses, the organisation of technical meetings, and consultancy missions to member countries. Since 2000 he works mainly as a freelance conservator and consultant in Italy. Moreover he cooperates frequently with UNESCO, the World Monuments Fund and other international agencies.

CASE STUDY I: The Conservation-Restoration of the Early Medieval Wall Paintings of Santa Maria Antiqua on the Roman Forum

Founded in the the 6th-century, Santa Maria Antiqua is amongst the earliest churches on the Roman Forum. Abandoned already after three centuries it remained buried for more then 1000 years. When rediscovered in 1900 it was celebrated as the Sistine Chapel of the early Middle Ages due to its unique wall paintings that document a period from which only very few examples remain elsewhere.

The case study will illustrate all phases of the recently completed conservation-restoration project, starting from the results of the preliminary condition survey. Problems and criteria in setting up a consistent and compatible treatment methodology will be discussed. Emphasis will be given to the fruitful cooperation between conservators, art historians and conservation scientists which also on this project has provided many smaller and bigger discoveries that have contributed to a better understanding of the monument and its decorated surfaces.

Following the fall of the city of Acre during the Third Crusade (1291), Famagusta rose to prominence after a large number of Christians settled in the city. Soon it developed into the most important and richest port of the eastern Mediterranean and the Cathedral of St. Nicholas in Famagusta’s main square became the coronation site of the kings of Jerusalem. Dramatic changes occurred after the Ottoman siege of 1571, followed by more than three centuries of neglect, compounded by earthquakes and floods, which left the large sections of the city in ruins by the time the British arrived in 1878. In 1960 Cyprus became an independent Republic and almost immediately descended into civil war. The island was divided in 1974 and remains that way to this day.

The case study will give an overview on the condition of the painted heritage of Famagusta and discuss general preservation strategies through the results of a survey commissioned by the World Monuments Fund, New York in 2010. It will then focus on conservation works at the Armenian Church, which were mainly dedicated to emergency stabilisation of painted plasters and documentation, but also included laboratory investigations and the execution of cleaning trials. 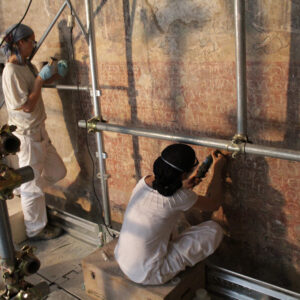