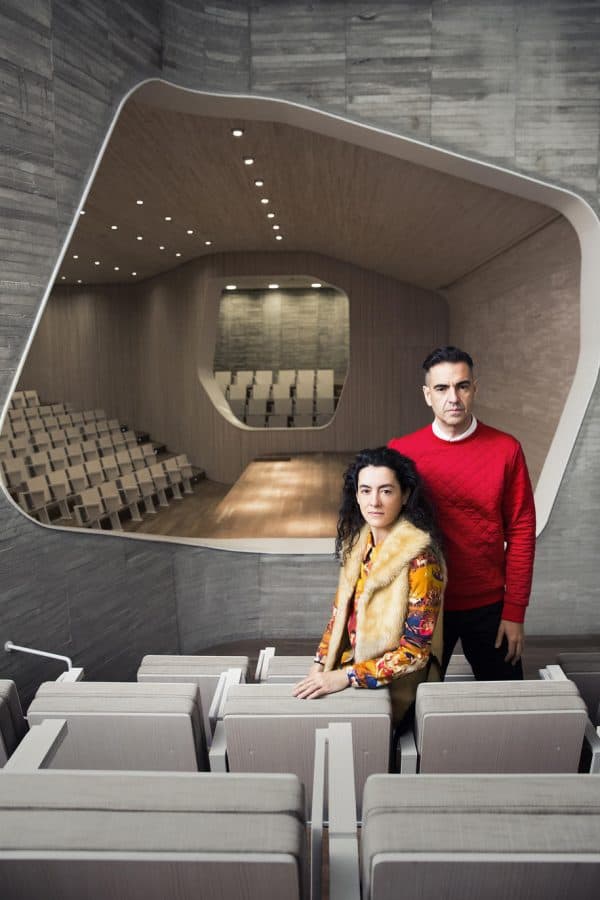 Being a gardener is to build the experience: Open Lecture by Cristina Díaz Moreno and Efrén García Grinda of amid.cero9

The next lecturers of the Open Lecture Series this spring will be Madrid-based architects Cristina Díaz Moreno and Efrén García Grinda of amid.cero9 fame. They will be stepping on the stage of the main auditorium of the new EKA building on the 28th of February at 6 pm to talk about a variety of amid.cero9 projects from the period between 2004 and 2015.

Cristina Díaz Moreno and Efrén García Grinda hold a MArch (E.T.S. de Arquitectura de Madrid, Universidad Politécnica de Madrid) degree and are co-directors and co-founders of amid.cero9, an experimental architectural practice based in Madrid. They are currently Visiting Professors at the Institut für Kunst und Architektur, Akademie der Bildenden Künste IKA, Vienna, Diploma Unit Masters at the A.A. School in London since 2009 (on leave during the 2018-2019 academic year) and Visiting Critics at SOA, Princeton Universtity since 2017.

Their work is part of the Permanent Collection of the Pompidou Center in Paris and has been exhibited in the Biennale di Architettura di Venezia in the Official Section in 2010, 2004, 2000, in the Spanish Pavillion in 2014 and 2002 and in the Greek Pavillion in 2014, among others.

Their projects have been widely disseminated and they have won more than 40 prizes in national and international competitions.

Amid.cero9 cultivates a post-digital, afterpop approach to the contemporary notion of space that enlists sociology, technology, media, politics and representation in projects ranging from architecture (Cherry Blossom Pavilion in Jerte Valley, Spain, shown at the 12th Biennale di Venezia, Giner de los Ríos Foundation in Madrid, Diagonal80 Industrial Pavillion in Madrid) to design (ESA Pavillion), ecosystemic studies (The Magic Mountain in Ames, We as a plague in Rome, TRP in Venice) and hybrid urban projects (Aijalaranta in Jyväskylä, or Hhouse in Balearic Islands).

Their lecture is titled “Being a gardener is to build the experience”. As our speakers promise: “The intervention will be based on a choral recount, with many voices from different authors, places, scientific disciplines and moments of history but also a partial one, which gathers some of the main topics of concern and study that inspired our project of the Institution for Free Education headquarters in Madrid. Anchored both in our own personal concerns and in the intellectual connections of the Institution, our aim was to project the intellectual legacy of Giner de los Ríos – a philosopher, an educator and one of the most influential Spanish intellectuals – towards the future.” Díaz Moreno and García Grinda’s lecture will also look at different amid.cero9 projects from the period between 2004 and 2015.

The architecture and urban design department of the Estonian Academy of Arts has been curating the Open Lectures on Architecture series since 2012 – each year, a dozen architects, urbanists, both practicing as well as academics, introduce their work and field of research to the audience in Tallinn. All lectures are in English, free and open to all interested.

Architecture and Urban Design Open Lectures
The website of the Estonian Academy of Arts uses cookies to collect statistics about our users and offer visitors the best experience. Do you agree to the use of cookies? Read More.