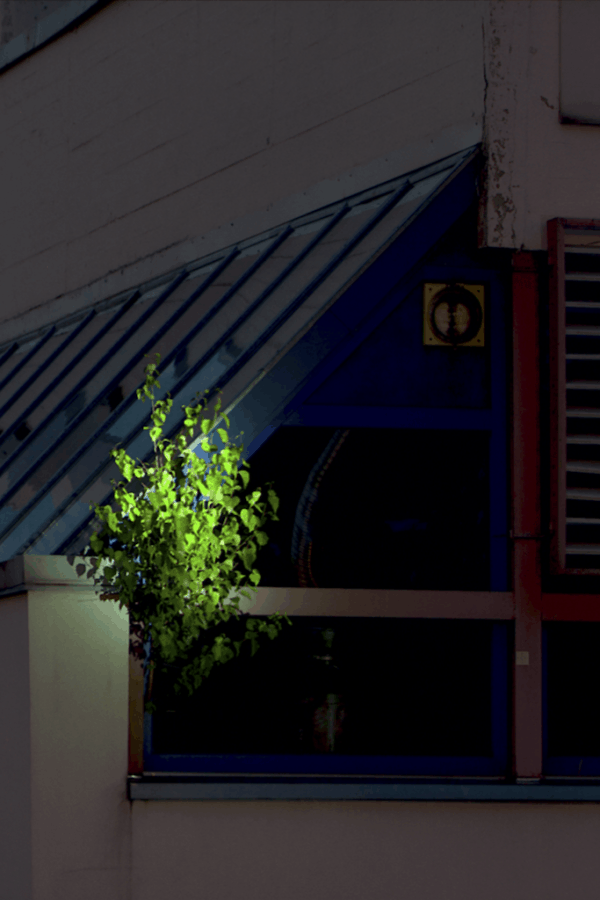 Join us for the opening of the solo exhibition “Five Volumes” by Paul Kuimet on Friday, January 3 at 6 PM. The exhibition will remain open until January 25.

The exhibition, consisting of film projections, a slideshow, photos and an installation, was first exhibited at Narva Art Residency in 2018. In the accompanying catalogue, curator of the exhibition, Nico Anklam, explores the different meanings of the word volume – it can be a part of a series, the amplitude of sound, and, above all, a property of three-dimensional space: its capacity. The various meanings of the title and its subtleties open the contents of the works at a slow and meditative pace, similar to film projections.
Three 16 mm film projections depict the Pärnu KEK building complex, built in 1969. Golden Home (2017) deals with a block of flats forming part of the KEK complex, which according to Anklam “conjures two different eras and styles of architecture – Socialist and Capitalist – with their specific hopes and promises of advancement. Both seem, again, to be stuck in constant return. This motif slumbers already in the title of the exhibition: volume as a word derives from the Latin volvere – to roll or fold, and its recurrence, re-volvere informs the term revolution.”
Kuimet has been working with space since 2013. He is interested in the connection of architectural space to photography and film, and, in turn, their relationship to the architecture of exhibition space. He also pays great attention to the scenography and choreography of both the visitors and the artworks in the gallery. For Kuimet, the relocation of the exhibition content to a new space and context is important when presenting the works at EKA Gallery: “These five volumes or units, which were laid out in separate rooms in Narva and projected onto double-sided screens have been presented as a single volume at EKA Gallery. In Narva, Display for Optical C-Prints hosted two photographs, but at the current exhibition, it will be used as a kind of pavilion that contains all four projectors.”

Paul Kuimet (b. 1984) is an artist based in Tallinn, Estonia. His work has recently been exhibited and screened at Schirn Kunsthalle, Frankfurt; European Central Bank, Frankfurt; KUMU Art Museum, Tallinn; WNTRP, Berlin and BOZAR Center for Fine Arts, Brussels. In 2018 he participated in the residency programme at WIELS Contemporary Art Centre, Brussels and will take part in the International Studio & Curatorial Program (ISCP) in New York City.

EKA Gallery
The website of the Estonian Academy of Arts uses cookies to collect statistics about our users and offer visitors the best experience. Do you agree to the use of cookies? Read More.