We Create the Future

The breakneck advances in technology have led us to the brink of the next industrial revolution, and for the first time in recent history no-one has any idea how the future is going to look like. We, interaction designers, are positioned right in the center of this transformation: it is in our hands to take the lead and create the technology-entangled future that is based on human values, needs and behaviours.

We Focus on Humans

Technology is becoming omnivalent, intelligent and emotional.  No longer a tool to pick up and use, it is starting to fulfill its premise by augmenting our abilities as human beings.  So we are no longer designing the technology, but rather the relationship we are having with it. This relationship has to be meaningful, valuable, manageable. It will have its ups and downs, excitements and bores, it will start, evolve, and end. All this has to be catered for from the human perspective.

The world we are designing for is developing extremely fast. We are not — we resist, adapt, and eventually embrace change. Thus we must take human beings as the unchanging cornerstone, the basis on which to build our designer attitude, approach, and methodology. At IxD.ma, the study plan is human centered, but having its finger on the pulse, quickly adapting to the world, and always looking into the future.

We are the innovators for the human centered future, and beyond

But human-centered design is no longer enough. In order to sustain or enhance our living standards after generations of exploitation, we have to look beyond human needs and values when designing the objects and services of tomorrow. We have to consider those of the planet. As interaction designers, we have a great impact on how people interact with the world around them, we are able to shape the human perception, even values and behaviours. Creating a positive future is in the hands of designers.

The IxD.ma was established by top industry experts in the country, with input from top design teams from across the Globe, on the notion that design is about creating options. We, the designers, are mediators, who are building the future by unlocking new possibilities. We don’t really know if our concepts are going to make people eat healthier, donate more or spend smarter. But we have created well-informed possibilities for these changes to happen. 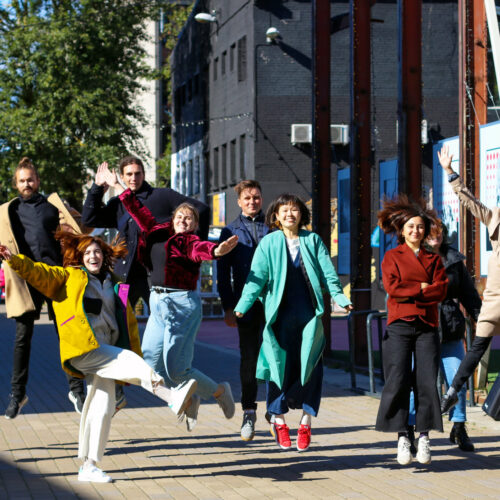 EKA Interaction Design MA programme invites prospective Master’s students to join the online info session on Monday, January 24, 2022 at 17:00 (Tallinn time, GMT+2).
7 December 2021
The website of the Estonian Academy of Arts uses cookies to collect statistics about our users and offer visitors the best experience. Do you agree to the use of cookies? Read More.