The aim of the workshop “Fluid Form” was to explore the process of parametric modelling leading to the creation of a physical prototype. There were two recommended goals – the object should control flow and/or the object itself could be poured, i.e. made of cast material. The workshop also marked a kick-off for the creation of the installation for the Tallinn Architecture Biennale at Kultuurikatel (the Creative Hub).

At first there was a one-day crash course for those with no previous experience in parametric modelling. On the second day we focussed on the process of making a negative form of the digital model and producing the actual object. The work on the next three days continued in groups of 3-4. During the interim evaluations, tips were given by architect Siim Tuksam, blacksmith Tauro Pungas, jewellery designer Sofia Pungas, sculptors Edith Karlson and Jass Kaselaan. Guidance and materials were also provided by Natufia Labs OÜ and Soojuspilt OÜ (concrete).

The workshop ended with a public evaluation and discussion of the works among the lecturers, students and the entrepreneurs sponsoring the TAB installation.

The results of the workshops are presented here.

Students participating in the workshop:

As a result of the workshop, the following concepts and prototypes were generated:

For the upside-down forest, plants are hung in upturned pots on steel chains. In the given situation, finding the right form for the pots is of crucial importance, as plants require adequate support, water, nutrients and light to survive. The students prepared a polymeric foam cast for the prototype. The cast was covered with glass cloth and epoxy resin that was removed after solidification. For the final touch, the prototype was plastered and sanded.

The idea to create a form out of water instead of a solid material emerged quite at the beginning of the workshop. The team explored the possibility of controlling the shape of water with vibration. It was later decided to use a transparent plastic tub and visually shape the water on it with light and vibration. The final form of the tub was created with a thin layer of thermoformed copolyester.

During the workshop, we investigated the techniques of casting objects of fine-grain concrete into moulds of various materials. For instance, it was experimented with impressions of ‘landscapes’ made of laser-cut and glued acrylic glass. The best results, however, were achieved with silicon moulds.

A group of students explored a method of manipulating plastic sheets with water. Two sheets of thin plastic were melted together along the outlines of parametric modelling and filled with water resulting in a transparent surface reacting dynamically to external pressure. The beauty of the method lies in the fact that the three-dimensional object is created with so to speak two-dimensional means – there is no need for milling, 3D printing or hand-made casts. 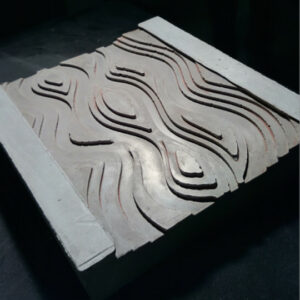 Architecture and Urban DesignFaculty of Architecture
The website of the Estonian Academy of Arts uses cookies to collect statistics about our users and offer visitors the best experience. Do you agree to the use of cookies? Read More.