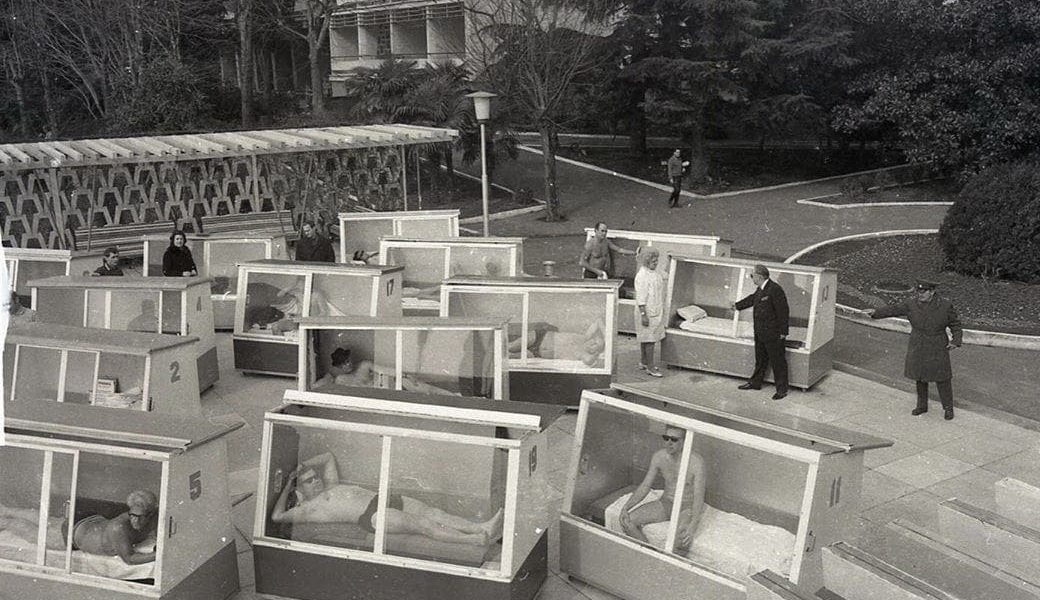 As part of the Open Lectures series of the Department of Architecture and Urban Design of EKA, architectural critic and urbanist Konstantin Budarin will take the stage in the hall of EKA on October 14, 6 pm with a lecture “Infrastructure of Care: The Past, Present, and Future of Soviet Leisure Heritage”.

This fall, all the lectures in the series revolve around the issue of healing in one way or another. Let’s look at whether architecture as a process can be therapeutic and in what way inhabiting space could be restorative, Simultaneously, whether and how architects can contribute to the healing of the construction world. However, some of the lectures in the series – as well as the October 14 lecture – look directly at the architecture created especially for landscape of care.

Konstantin Budarin is a member of the architectural collective Kultura and one of the initiators of the research project Sanatorium Premium – the focus of the latter is on the Soviet-era recreational infrastructure and the development of its possible uses today. The sanatorium architecture of the so-called Eastern Bloc has become a social media hit in recent years, viewed as an archaic curiosity with aesthetic pleasure, without delving into the role of sanatoriums in the operation of large-scale industry, or how a recreational machine worked to oil the human cogs of a production machine. The spatial programme of any sanatorium was led by prescription procedures, and Budarin asks – what procedures and what space would we need today to stimulate exhausted bodies and burned out minds? Do we have anything to learn from the sanatorium system in the Eastern Bloc?

Konstantin Budarin is the author of numerous publications on architecture and urbanism published in Strelka Mag, Calvert Journal, Project Baltia, and others. He is an alumnus of Strelka Institute for Media, Architecture and Design 2014/15.

In order to minimize the risk of the virus spreading, we will broadcast the lecture on EKA TV and it can be viewed along with all previous lectures at www.avatudloengud.ee. However, the lecture can also be attended in-person – we do ask you to carry your COVID vaccination certificate or proof of having had COVID; there will be no on-site testing. Academy students are subject to the usual in-house rules. NB! You can’t ask questions via EKA TV, so it’s worth coming to the hall to participate in the discussion! The lecture is free and in English.

This lecture takes place in cooperation with the Estonian Museum of Architecture and is part of the Future Architecture programme 2021. Future Architecture is the first pan-European platform uniting architectural museums, festivals and other development organisations in the field, bringing the public closer to both the cities and the future of architecture. The lecture is supported by the European Union’s Creative Europe Programme.

The season of open lectures is supported by the Estonian Cultural Endowment.

Architecture and Urban DesignFaculty of Architecture EventsOpen Lectures
The website of the Estonian Academy of Arts uses cookies to collect statistics about our users and offer visitors the best experience. Do you agree to the use of cookies? Read More.