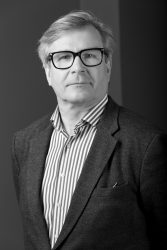 The Rector is responsible for the everyday management of the university, the general status of the university and its development and the legitimate and effective use of financial resources. The Rector also appoints the vice rectors and determines their field of activity.

Mart Kalm was born in Tallinn into a family of editors. He graduated from Tallinn II Secondary School (currently Tallinn Secondary School of Science). From 1979–1984, he studied history and art history at Tartu University. In 1991, he received a PhD from the Central Scientific Research Institute of Theory and History of Architecture in Moscow for his thesis on the architect Alar Kotli. In 1998, he defended his second PhD (= Habilitation) at the Estonian Academy of Arts on Estonian architecture culture during the interwar period.

As an architectural historian, Kalm has mainly studied the work of Estonian architects in the 20th century (before and after World War II). His most important work is the voluminous “Estonian 20th Century Architecture” (2001; Grand Prix of the Estonian Cultural Endowment in 2002). He has written a monograph on architect Alar Kotli (1994; Kristjan Raud Prize) and a book about Olev Siinmaa (2011), which was accompanied by an exhibition. He was awarded the national prize in history for the compilation “History of Estonian Art”, Volume V (1900–1940), published in 2010. He has written an architectural guide, “Functionalism in Estonia: A Guidebook” (1998), and participated in the compilation of several other reference books. In recent years, Kalm has been focusing his research on the architecture of collective farms in Soviet Estonia.

Mart Kalm has been active as an architecture critic and is interested in landscape and interior architecture. In his youth, he also published art and design criticism. He has often expressed his opinion on heritage issues and composed the heritage requirements for the conservation of the Riigikogu (Parliament) building, the Office of the President of the Republic of Estonia and villas at Rüütli 1a and Lõuna 2b in Pärnu. In 2004, he produced a series of TV broadcasts, “Muinas-TV” (Heritage TV).

In 2018, Kalm was elected to the ELIA Representative Board and is also a member of its Executive Group.

Mart Kalm is married to the graphic artist Anu Kalm and they have two adult children, Gustav and Helga.

In 2020, Mart Kalm was re-elected as Rector of the Estonian Academy of Arts for a second term.

The Council is a management body responsible for the long-term and sustainable development
of the Academy as well as for important economic, financial and assets-related decisions,
ensuring the achievement of objectives of the Academy.

The Council is made up of nine members:

The authority of the Council shall commence on 1 January 2020. The Council members are confirmed for five years by the Government of the Republic.

The Senate is made up of 22 members:

10) Representative of the students Margus Elizarov;

11)  Representative of the students Triin Metsla;

12) Representative of the students Markus Vernik;

13) Representative of the students Dana Vares; 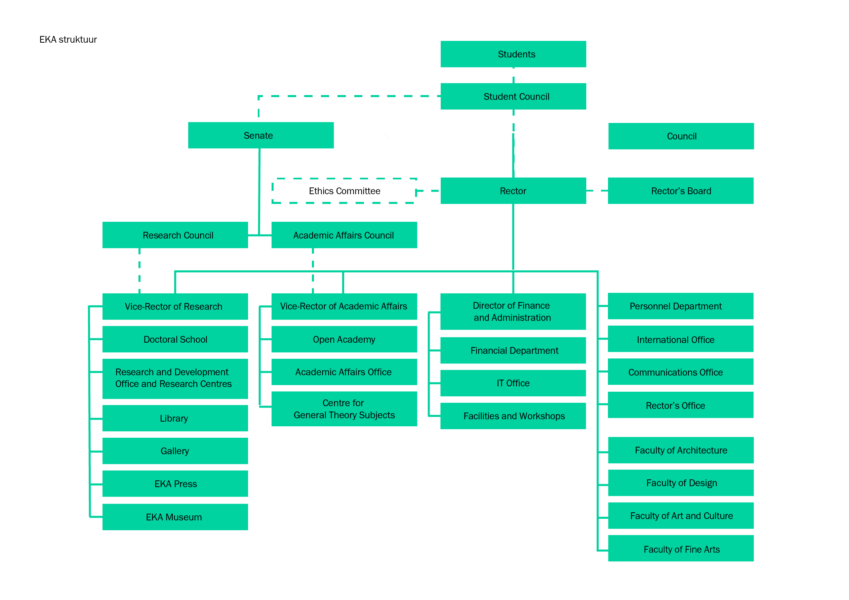 Academic Structure of the Estonian Academy of Arts