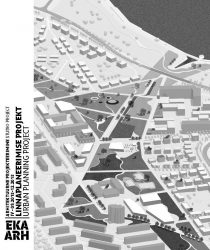 During their fourth year of studies, students focus on the topic of living. It constitutes the most extensive spatial theme in architecture, requiring an understanding of the spatial context, reasons for its development and the current possibilities. The works deal with ideas projected to the future, considering the ideals and visions. The task consists of two parts – urban planning of more extensive systems and volumes (in autumn term) and the further development of the ideas in the form of housing, apartments and surrounding areas (in spring term). This year’s works focused on the places in Tallinn selected by students themselves. These places have the potential of becoming something more than we see today. They are mainly in the so-called brown zones – former industrial areas – with their further development influencing also their surroundings. In addition to the housing, functions suitable for the location were added.

Architecture publications
The website of the Estonian Academy of Arts uses cookies to collect statistics about our users and offer visitors the best experience. Do you agree to the use of cookies? Read More.