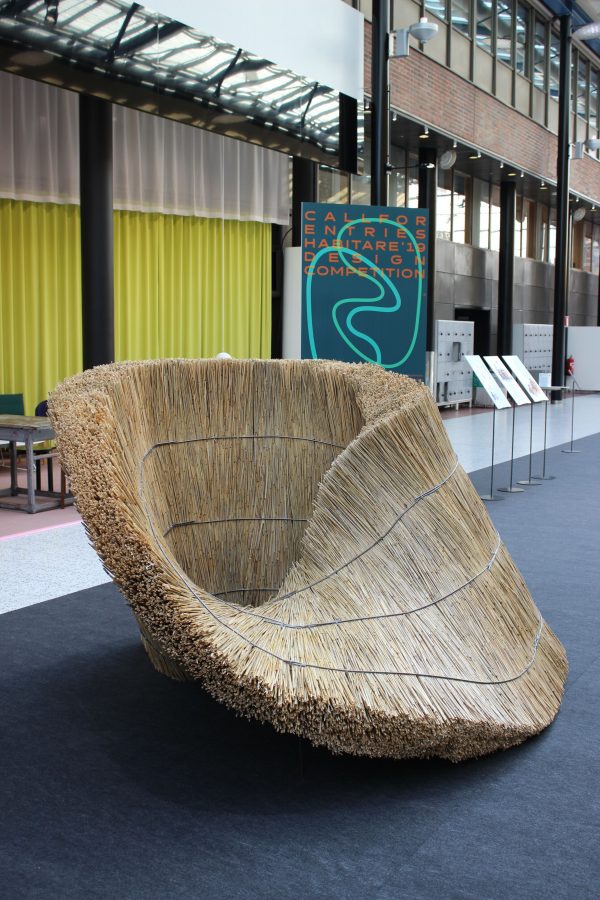 EKA interior architecture department master’s student Kadri Kallaste, part of the duo with Pinja Koskelin, were announced as shared winners of this year’s Habitare Design Competition, which is targeted at design, architecture and spatial design students. The other winner was Erik Lindahl with his design Palikat. The theme of this year’s Habitare Design Competition was “tête-à-tête” – an intimate meeting between two people. The contestants were asked to design a place, space or piece of furniture suitable for a meeting between two people.

The duo’s design “Gulf of Reed” was inspired by the common reed generally found in the Gulf of Finland. The sculpture, which is made of this versatile and natural material and which mimics the shape of the Möbius strip, provides an opportunity for having intimate conversations and occupying the various surfaces and levels of the sculpture.

Kadri Kallaste: “Common reed lines the shores of the sea by making it a common visual and acoustic property of the region. Although it has been used for centuries in traditional architecture, it is seldom implemented in modern design. Our aim was to shake off the concept of a traditional material and give it a fresh approach. For this purpose we created a functional sculpture in the form of the Moebius loop. Its minimalistic but complex geometrical form enabled us to explore and present the aesthetic and physical properties of the chosen material.

The form of the Moebius loop symbolizes the ever-evolving character of a friendship. Our design enables two people meeting for a tête-à-tête to explore the form freely without restricting their position nor location. They could be sitting and facing each other, laying, leaning or hiding in the center of the structure. The variability of the use symbolizes the acceptance of each other’s character and needs as a basis for a good relationship. Reed’s dualistic character can as well refer to various aspects of a friendship. A separate straw can be fragile, however, when grouped together numerous straws form a strong and lightweight structure. Similarly to a structure of reed, also friendship needs proper care to last long and stay intact.”

The head judge of the Habitare Design Competition 2019 was the German designer and founder of Diez Office, Stefan Diez, who chose the winners from among four finalists that were picked from the 40 designs submitted to the competition. According to Diez, Kadri Kallaste and Pinja Koskelin’s design is like an installation – sensual and sustainable. “This piece shows that there is huge potential in rediscovering and further exploring this material, reed”, Diez said.

Habitare is the largest furniture, design and interior decoration event in Finland. Habitare offers experiences and ideas on interior decoration, and on the functioning and look of homes and other spaces. Habitare highlights the ideas and works by a new generation of designers, and sparks discussion.