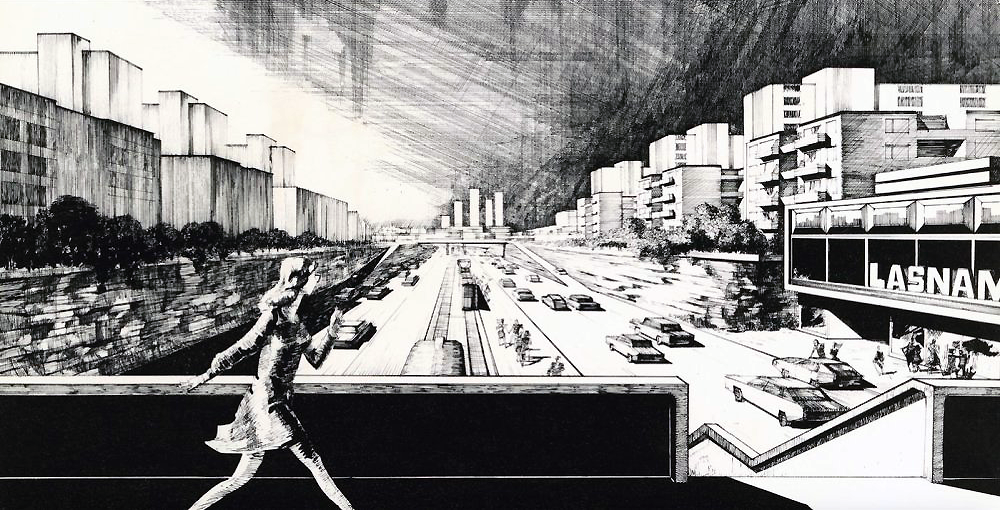 On January 25 2018, at 3 pm, a summary and presentation of the work of the 2nd stage of the EKA research project Unfinished City will take place at the Museum of Architecture. Everyone is are welcome!

At this stage, our research has focused on the issues of urban structure and density, but inevitably also looks at urban planning issues more broadly. The focus of the work is Lasnamägi, as a sample of radical change in historical urban planning and a great modernist promise of a brighter future for the broad masses. The living environment aimed at the abstract average person was made widely available by a panel construction based on extreme simplification and repetition. Almost half of Tallinn’s population lives in such an environment if we combine Lasnamäe, Mustamäe and Õismäe. The share of low-rise residential buildings with modern panel design and low-cost panel houses is significant in a very large part of the world’s cities. Now that the time of rapid growth and expansion of cities in Estonia and the developed world at large is over, at least for a while, it is necessary to find a new identity and ambition for the future for panel housing districts that have emerged from the model of extensive growth.

The work has addressed issues that seek to open up the current nature of the modernist city and outline its possible future developments. Who lives here now and what can they expect from their living environment? Can and how can we bring spatial diversity and jobs to Lasnamäe, which according to the original plan were zoned to be located elsewhere and thus reduce the need for commuting within Tallinn? Can – and how – we better connect Lasnamäe to city-wide (public) transport and green space networks? What framework for the further development of the land structure after the privatization of Lasnamäe will create? How to direct development activities in Lasnamäe both spatially and temporally? What could be the driving force and driving the development of Lasnamäe now and in the near future and how to amplify it?

The main organizers of the research have been prof. Andres Alver, emer. prof. Veljo Kaasik and prof. Toomas Tammis from the Department of Architecture and Urban Planning of EKA and prof. Andres Sevtsuk from Harvard University. During the autumn semester, 4th year students of architecture and urban planning at EKA and Master’s students of urban planning from Harvard University were also involved in the work. EKA professors and Andres Sevtsuk (via Skype) will present the work.

At the beginning of 2017, the Department of Architecture and Urban Planning of EKA initiated the research project “Unfinished City”, which deals with urban planning visions and spatial scenarios in Tallinn. Lecturers, researchers and doctoral students of the department as well as external specialists contribute to the project.

The research focuses on 6 major topics: planning practices, urban structure, urban density, urban boundary, large urban infrastructure and urban character. Each topic is covered by a five-member research group for one semester. The committee organizes one international workshop on each topic and works with EKA students of architecture and urban planning and urban planning in parallel. The six-semester research section is preceded by an analysis of similar examples from around the world and an international conference opening the topic. This is followed by a summary of the work in the form of an exhibition and a book, which bind all the research into a holistic approach. The process will end with an international conference presenting the results of the research to both professionals and a wider audience.

The research project UNFINISHED CITY of the Faculty of Architecture of the Estonian Academy of Arts will be realized thanks to the support of Kapitel, the city of Tallinn is also involved as a cooperation partner.

From Thursday to Sunday (January 25-28), all visitors to the Museum of Architecture have the opportunity to see an exhibition on Lasnamäe. In addition to the projects of architecture and urban planning students of the Estonian Academy of Arts and Harvard University, the materials of the Mart Pord archive and the official planning documents, sketches, models and diagrams of the Museum of Architecture collection are on display.

Faculty of Architecture
The website of the Estonian Academy of Arts uses cookies to collect statistics about our users and offer visitors the best experience. Do you agree to the use of cookies? Read More.