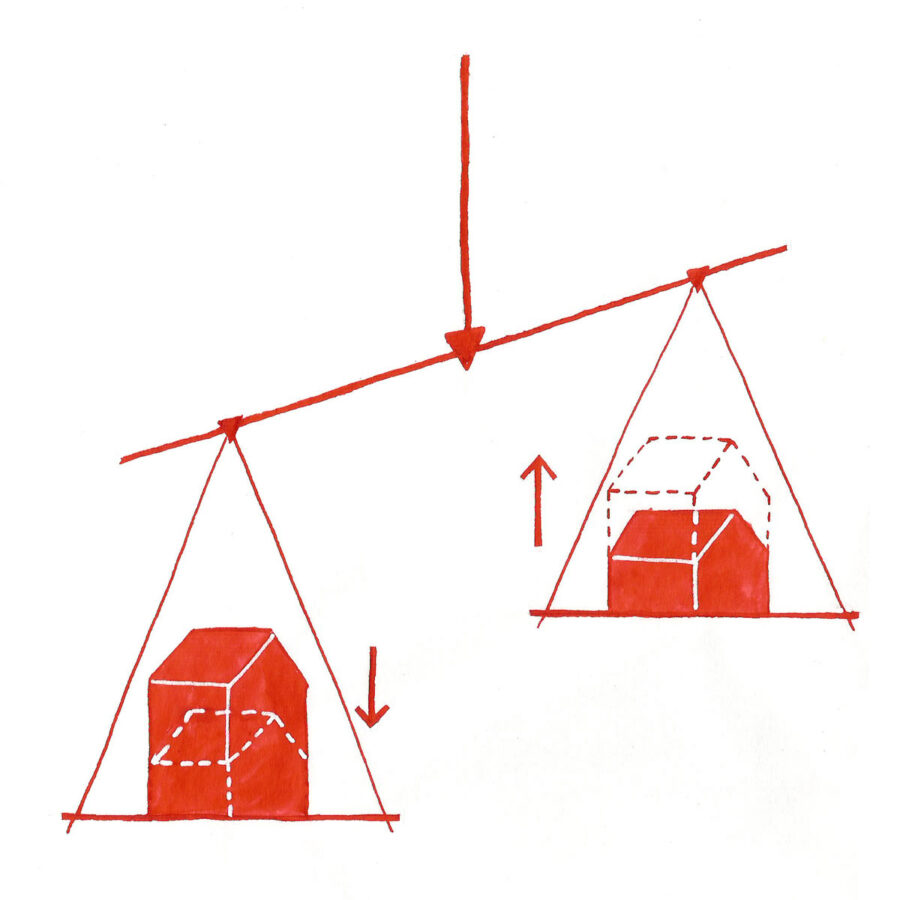 Before everyone heads off to their summer homes or into the wider world beyond, a new issue of the bilingual magazine Ehituskunst of the Faculty of Architecture of EKA shall arrive from the printing house.

In order to celebrate this double issue of 320 pages titled “SMALL TOWNS: NON-GROWING”, everyone is welcome to join us on the stairs of the EKA lobby on June 22 at 2 pm to enjoy a glass of bubbly and flash-talk-format mini-lectures related to the topic of the new issue by Madis Vasser, Margit Mutso and Alvin Järving.

Most Estonian cities have been shrinking for a long time, or at least not growing. It is only recently that this fact has begun to be acknowledged. We’ve been pretending that we live in the time space of eternal growth. Architects rarely find themselves in shrinking places, and the tools for growth are not always right for those locations – an expanded toolbox and a wider imagination are needed.

Against the background of global overheating, with the world’s population growing, densifying and over-consuming, a smart downturn could be considered a positive sign – one of a shrinking footprint and steady development. However, this cannot be said to be the case in Estonia.

As we worked on this issue of Ehituskunst, it soon became clear that the declining and non-growing context required the widest possible view of spatial practice. Therefore, in addition to conversations and projects directly concerning (urban) space, the new Ehituskunst also ponders possible changes in regulations, looks at rurality, regional division, engagement, afforestation and more. Jeremy Till, Keller Easterling, Philipp Oswalt, Oliver Orro, Toomas Paaver, Architect Must, Margit Mutso, Laura Linsi, Tarmo Jüristo, Andres Ševtšuk, Kalle Vellevoog, Francisco Martinez, Siim Raie and others will have their say in the new issue and Ulla Alla has contributed with illustrations.

Ehituskunst is a magazine for architecture practitioners dedicated to the search for spatial ideas. From issue 59 onwards, the magazine focuses on the specificities of local contexts, creating a bridge to similar places and areas. Each issue  deals with one context influencing the creation of space through one dominant and locally important aspect, asking: how does this aspect affect spatial practices? What unique, special, hidden potential does this aspect create? What spatial ideas are embedded in these potentials?

Ehituskunst issues largely consist of interviews and conversations. Thus they are journeys of dialogues, reflections and conversations that do not try to provide definitive recipes and answers and provide the best examples, but to sow the seeds of investigation that will hopefully continue in university studios, architectural offices, offices of municiopal and state officials, and at the dinner table of the wider public. Get your copy of the new issue at the presentation, or after Midsummer’s Day from the Estonian Museum of Architecture and most better-equipped bookstores.

Eik Hermann
Editor in Chief of this issue
ehituskunst@artun.ee

Architecture and Urban Design
The website of the Estonian Academy of Arts uses cookies to collect statistics about our users and offer visitors the best experience. Do you agree to the use of cookies? Read More.